skip to main | skip to sidebar

Up in the Airwaves

Imagine for 1 hour and 49 minutes that your iPod was put on shuffle, that any song could play and you had no control. All you could do was listen, feel, and just go with the tune. 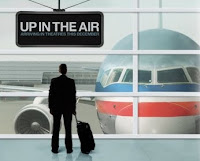 Now imagine a movie that first makes you identify with a character who seems to be in control; he appears to have everything figured out. You are taken by the beautiful panoramic shots of the heartland of the United States and this aerial view draws you into the movie. You hear the soul, the funk of Sharon Jones and the Dap-Kings singing the song “This Land Is Your Land:” Nobody living can ever stop me, / As I go walking that freedom highway; / Nobody living can ever make me turn back / This land was made for you and me. In this ode to the American ideal of liberty, the tone is set. You understand that anyone can live in whatever way they want, all because of choice. Can you hear the freedom? It sounds like a 747 going up in the air at around 600 mph, passing over everyone and everything in its path. Can you hear the loneliness . . . of being the only plane on a route and fearing the sound of another craft nearby? This plane is Ryan Bingham: a man who flies over 320 days of the year. His job is to go place to place to fire people. His life for no one - not even for him - but the story continues and songs move you through the phases, the ups and the downs until you reach the climatic scene that sets Ryan's life in perspective.

This moment comes in the film where Ryan and Alex’s love blossoms. The scene involves their trip to Ryan’s high school back in Detroit. As they break in and begin exploring Ryan’s past, “Angel in the Snow” by Elliot Smith fills the air. The song, a bit of a folk tune, is warm and somewhat naïve. It brings viewers back to their youth, very appropriate for a scene where Ryan is back at his former stomping ground. As the scene unfolds and it becomes clear that there is a deep and passionate romance developing between the couple, the lyrics of the song tell the story. “Don't you know that I love you/ Sometimes I feel like only a cold still life/ Only a frozen still life/ That fell down here to lay beside you”. A very fitting song considering the snow and ice that surround both them and the school. Even more important is that Ryan is finally letting himself develop a meaningful connection with someone. For so long he had lived a life of solitude; but at the end of this journey back at his high school he suddenly seems like a completely new man. And as the couple kiss and the music fades, viewers are left overwhelmed with emotion. Clearly, the soundtrack was essential to the power and force felt in that scene.

Songs only last so long and the emotions are fleeting. Now this does not mean the change is not there; it just assumes that it keeps playing, gradually changing in time. So for those who were patient enough to sit through the credits, you were given some closure with Kevin Renick’s musical rendition of the movie in his original song entitled “Up in the Air:” I'm making some plans, / Finding out there's always new demands. / And I can't be precise / When people ask me what I'm doing with my life. These words speak to the uncertainty of the times, the disconnection people feel from others who are moving on with their lives and finding new jobs to define their time. But the tune plays to all of us, just as it did Ryan Bingham, who continues on his journey to find some meaning in his life. The chords are struck and you know that the happily ever after does not come in a three minute piece or, in this case, a 109 minute film.
Posted by Susan Schuyler at 9:39 AM